12 November
Today's spotlight is on the works of author Ellison Blackburn. Her Regeneration Chronicles fall into the fascinating and oft overlooked category of literary sci-fi. As such, this is series that will appeal to a wide variety of readers, not just those of us on the science fringe. Regeneration X is the first in the series (you can read my review here) and Progeny, the second book, has just released on November 5th. Read on to discover more. 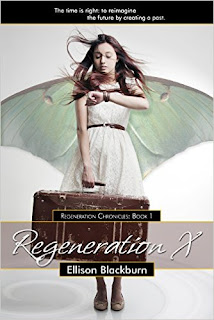 
Regeneration X is a story about having choices and dealing with the consequences; creating new memories and letting others fade; and making sacrifices in pursuit of happiness.

If Charlotte Rhys Fenn could do it all over, knowing what she knows now, she would be different.
Charley leads a comfortable life with her best friend and perfect match, Michael, a man with whom she shares two lovely pet children (canine and feline), and a home in the beautiful Pacific Northwest. She’s fortunate to have a caring and supportive family, and two amazing friends, Inez and Becks. Professionally, she holds a secure position as editor of a respected healthcare magazine. Her life is settled, as is her future.
Acquiring this existence of hers hadn’t been easy. For at least twenty years she felt like a wind-up toy, methodically following preprogrammed rules—step one … step two. She even imagined herself as a minuscule, but essential, cog inside a big machine with the mechanical brain. No matter what she tells herself, it hasn’t helped since another thought flutters through her mind as frequently: Going through the motions is the same as coasting toward nothingness.
It is 2025, the time is right. Technology, in a rapidly advancing world, makes it possible to reimagine the future by recreating the past or, more aptly, by creating another past.
Charley must either embrace her well-earned, sedate lifestyle, or invite a change that could alter her future irreversibly. It’s a difficult decision, one that could destroy all she has endeavored for, turning their life not only upside down, but backwards, forwards, and inside out. 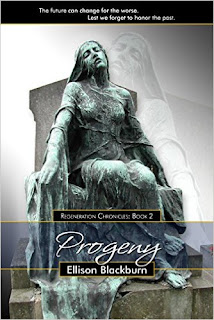 The Regeneration Chronicles continue with a story about a legacy bestowed, an inheritance claimed, and each individual’s responsibility to him or herself and mankind.
The future can change for the worse, lest we forget to honor the past.

One of a Number …

Nineteen-year-old, Emery Kidd is one of two historians for her community. As a Chronicler, she is aware of the minute details of a society dramatically changed in the course of the two hundred years since cellular regression began. However, it is only now, after one of her lifetimes has passed, Emery discovers an important fact about her own heritage. She is the daughter of the most famous of regeneratives to have ever lived.
Consequently, Emery is also quietly learning just what it means to be the daughter of a martyred woman. Undoubtedly, she bears a strong resemblance to her mother, but more than auburn hair and expressive facial features, Emery would like to believe she’s inherited the same strength of character as well. And yet, believing and knowing are entirely separate matters.
Since everything changes with time—in varying degrees—and destiny often unfolds a plan unforeseen, Emery may just find the opportunity to test her belief. In fact, the entire human population will come face to face with their true inheritance.
The question is how this legacy will be received. For the future is inevitable, this much is certain. Lest we forget, the mere passage of time does not come with it the entitlement to life. To live and prosper is a path that is earned, but mankind has seemingly forgotten this. Can Emery remind the world that survival requires conscious effort? Will Emery and her friends, Cassidy, a fellow chronicler, Liam, a brilliant engineer, and Aiden, a reserved mediator be enough to save the oblivious many?

Ellison Blackburn has been a web designer/developer for over fifteen years. Next to writing fiction and poetry, her passions include painting and collecting vintage thingamabobs. She is the author of Regeneration X and Progeny, books 1 and 2, respectively, of the Regeneration Chronicles.

Raised in Chicago, Ellison relocated to the Pacific Northwest with her husband and their three beastly, furry children.