09 November
Hey everyone! All week I'm going to be featuring new and upcoming Indie books and authors for your reading pleasure! Up first, we have the latest release from the very talented VM Sawh. GR3T3L-1 is the fourth installment in his Good Tales for Bad Dreams series of re-imaged tales we all thought we knew. GR3T3L-1 is the first sci-fi of the series and you can see my review of it here. Read on to learn more about this fantastic series! 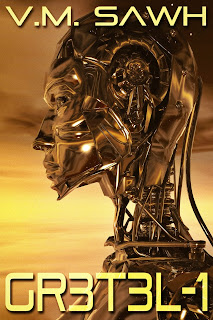 ~Description~
When they are stranded on the surface of a hostile alien world, two sentient robots H4NS3L-671, the military-minded combat drone, & GR3T3L-1, the advanced surveyor prototype, find themselves with neither memory nor mission. With no resources and no one to count on but each other, the robots must learn to work together in order to endure the brutal landscape, unlock the mystery of their missing memories, and plan their own rescue, all before their power runs out. What they don’t know is that the dangerous planet holds a terrible secret that could ruin their chances of ever escaping alive... This is “Hansel & Gretel” told like never before. This is "GR3T3L-1." 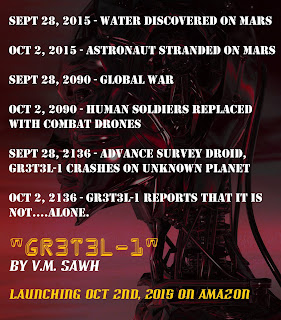 ~Excerpt~
As the last of the light faded, and the surface fell into darkness, GR3T3L registered a temperature drop of 12 degrees. Its sensory lights sprang to life automatically cast beams over the sandy ground. Gravity was lighter here, meaning they could cover ground quickly. Still, with the storm looming to the North, GR3T3L knew they were running out of time. An objective analysis of the situation indicated that their chances of finding sufficient cover in time were less than 23%. GR3T3L’s recovering database indicated that throughout human history, there were many examples where humans had persevered when the odds were against them. How did humans do this? GR3T3L cross-referenced the search results with a methodological analysis and came to a single conclusion. Hope. The concept appeared to mean a great deal to humanity. Hope for an end to disease. Hope for an end to suffering. Hope for salvation. GR3T3L paused in its analysis as trillions of images and videos flooded its mental display. One of the videos playing depicted an operation from the United Africa campaign wherein a group of combat drones were advancing toward a group of children huddled behind the ruins of a blasted building. GR3T3L immediately understood the children to be members of the same family; they clutched the mangled remains of their dead parents. The drones took aim with the automatic weapons and with efficient bursts shot each of the children three times in the head. Blood and brain sprayed the wall behind them, obscuring green graffiti which read: We were born free. One of the drone’s radios crackled, transmitting its message. “Enemy combatants: zero.”
Given their present situation, GR3T3L was interested in how humans responded to similarly dire conditions. Its HUD referenced another video where dozens of Africans were depicted kneeling inside a mosque. From its files, GR3T3L came to understand that humans had often used religion as a guiding set of principles for living their lives. It often required strict adherence to a set of text-based rules of conduct. Compliance with said rules would result in a reward, promised in the life after death. As GR3T3L perused through its files, the robot concluded that access to the reward was determined by the accumulated metaphysical weight of a human’s perceived good or bad actions. Thus when a human was subject to adverse conditions beyond their control, religion could be used as a means of generating hope. GR3T3L found this curious, wondering if such a thing could ever be experienced by someone who wasn’t human.
“Warning: increased air mass detected,” H4NS3L declared. “Orbital beacon indicates planetary atmosphere has become dangerous. Wind speeds in excess of 100 KPH. Airborne debris has increased in size and mass.”
GR3T3L cast its sensors toward the oncoming wall of sand. “Crystalline matter from the surface has been swept up by the air mass. The particles pose a physical threat to shell integrity.”
The bank of wind-blasted particles rushed toward them with all the force of a hurricane. Electric arcs from the angry clouds danced down into the oncoming sandstorm, crackling into a filament web that made the crystalline particles sparkle. GR3T3L could already feel the first bits of crystalline particles ricocheting off its metal skin. If they didn’t move quickly, the cumulative force would rip them to shreds. GR3T3L quickly mapped their surrounding area.
“Head West-Southwest! Take cover under the escarpment!”
GR3T3L reconfigured its motors for speed, shutting down all non-essential systems to conserve power. It could hear H4NS3L doing the same, even though the drone possessed a much larger power source. It was now a matter of survival.
GR3T3L ran across the surface that was rapidly accumulating a dense layer of sand. A rush of air blasted particulates against its skin. The wind roared. A wave of sand crashed down upon GR3T3L’s shoulders, pushing the robot to its knees. The sand was turning the ground into a thick soup. GR3T3L braced itself with its hands and tried to haul itself up. Its servos strained with the effort, but could not move. Another heavy wave thundered down on GR3T3L’s back. Sand had gotten into its joints. A wind shear sliced through the metal skin of its shoulder. Its alarms blared. Rounded semi-silicate grains had gotten inside its shell. The wind blasted again, from another direction this time, making GR3T3L’s skin crack. It looked down and saw that the tear in its skin had ripped further, exposing more of its sensitive systems to the onslaught.
Re-routing systems, its mind raced ahead, trying to contain the damage before things became catastrophic, activating secondary systems. Calculating distance to escarpment.
Its internal display flashed.
[100 meters]
GR3T3L raised its head. Servos in its neck were starting to seize. The wind rattled against its back.
Not good, it thought, activating its radio. Before GR3T3L could send a cry for help, its motion tracker pinged. There was movement to the left— H4NS3L? GR3T3L turned its head, but its servos jammed halfway. Switching to a heat-based thermal tracking view, GR3T3L focused on the bright outline. The shape, just at the edge of GR3T3L’s field of view, was several degrees warmer than the surrounding sand-storm.
“H4NS3L!” GR3T3L called through the radio, “H4NS3L, can you see me?”
The shape shifted sideways, moving almost like a liquid despite the maelstrom. GR3T3L saw that the shape was large, but appeared hunched with a tall extension protruding from the main body.
GR3T3L froze. That wasn’t H4NS3L. Instantly reactivating its full sensor suite, the robot directed all of its power toward scanning the shape. Amorphous and ill-defined behind the shearing winds, the shape appeared to be sliding closer every minute. GR3T3L kept its gaze trained on the encroaching form, all the while calling for H4NS3L on the radio.
The shape loomed large, moving slowly and smoothly around GR3T3L, as if making a cautious examination. The robot tried to change its position, but the powerful winds forced it back down. Suddenly, GR3T3L registered a sensation on its back.
Contact. 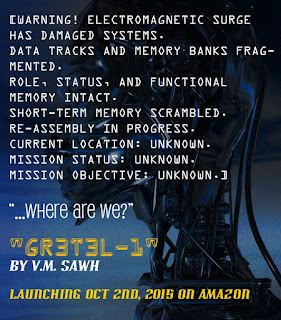 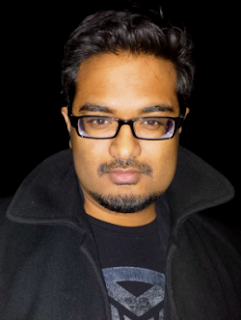 V.M. Sawh didn't always know he was going to be a writer, but from the age of six he's been putting pen to paper, creating serialized fiction. Hailing from the humid jungles of South America, Sawh crossed oceans to arrive on Canada's snow-covered shores at age nine. He continued writing, creating serialized fiction year after year until he challenged himself to write a novel. His first trilogy of novels was completed by age sixteen, but despite encouragement from his Writer's Craft professor, never published, as the publishing industry was as intimidating then as it is today. He continued writing poetry and fiction for the next decade and a half until an open call for fairy-tale submissions changed everything.

V.M. Sawh resides in a small town north of Toronto, with his beloved wife and two cats. He continues to spin fairy-tales that will haunt your dreams.

Here are some interesting facts about me.

i) As part of the launch for "Cinders", I was featured in the January 2014 issue of the Toronto Sun newspaper.

iii) "Cinders" and "Hontas" have made it to #1 on Amazon's Hot New Releases List.

iv) "Anastasia" has over 12K reads on Wattpad, Toronto's free story-sharing website and is currently featured on the Historical Fiction front page.

v) Completed my first trilogy of novels by age 16. 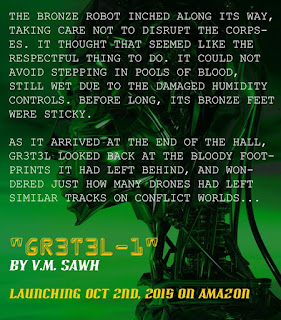 Goodreads: http://www.goodreads.com/VMSawh (for What Readers Think)