10 November
Hey, who's this? Who let Christina McMullen in? Aw geez! There goes the neighborhood! Yes, I'm sneaking my own book into Indie Author Spotlight week because well, truth be told, I had four authors scheduled and I happen to have a book coming out at the end of the month myself, so my somewhat obsessive need for order demanded I fill out the whole week. Friends without Benefits is the fourth book in the Rise of the Discordant series. Read on to find out more, but first, look! A cover! 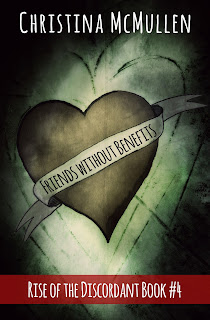 Yes, I am pretty proud of this one.

Donna's love life is at an all-time low. Despite breaking her family curse (ensuring she would not give birth to the demon spawn destined to bring Chaos to power), she still can't get a date. Worse, the incubus who was supposed to sire the all –powerful demon spawn won't leave her alone. But instead of keeping her up all night with passionate dreams, he just wants to talk.

Meanwhile, the fissure that appeared under the site of the old mill grows wider each day. Desmond is running himself ragged trying to prevent the weakening of the barrier between realms. As such, he accidentally lets slip Seth’s identity from a previous life, bringing about rift of a different sort. This one between the two agents of Order.

As winter approaches, it is no longer a question of if the Discordant will rise up and try to claim Blackbird, but rather how soon? Will the agents and mystics be able to put aside their own personal issues long enough to vanquish Chaos or will Order crumble? And perhaps the most pressing question of all: Is Big Royal Burger even open yet?

Donna sat up and blinked. She was no longer in her bed, or in her room, or in Blackbird, for that matter. The bright, sandy beach was nowhere she had been before. Reclining back on his elbows just a few feet away was her incubus. She was growing used to his lack of clothing and modesty, but still marveled at the fact that living within a dream made him impervious to things like sand being wedged into uncomfortable places.
“I brought you something.”
Donna raised her eyebrows.
“You did? I don’t see anything.”
Between the lack of clothing and expansive, empty beach, there wasn’t much of a place that he could hide anything. Unless it was something very small…
She stomped down hard on that line of thinking and chastised her heart for the sudden flutter. What had gotten into her?
“Don’t you?” he asked, stretching in a practiced way that was meant to seem effortless and draw her attention.
“Oh, so are you saying all of this is for me?”
“Of course,” he said with a wink.
“To do with as I please?”
At that, he gave a wistful sigh.
“If only we could.”
His words were like a bucket of ice water that stopped the fluttering and sent her waterlogged heart plummeting.
“I see,” she said tersely and got up to walk along the edge of the surf, determined to get at least some pleasure out of the artificial paradise. She’d barely taken two steps before he appeared at her side.
“Where are you going?”
“For a walk.”
“Okay, I can do that,” he said, falling into step beside her. She did her best to ignore him, but it wasn’t long before the combined silence and his unwavering gaze began to drive her mad.
“So, do you have a name?” Donna purposefully looked out over the setting sun and the beautiful fiery rainbow it made on the water’s surface, determined to stay strong and not give in.
“Like clothing, Fa Be’yoh doesn’t seem to believe that there’s a need for names.”
At the reminder of his nakedness, her head turned on instinct. Donna was sure she saw a smug smile ghost across his face.
“Well that’s just stupid,” she huffed. “Names don’t cost anything and he gets to have one.”
“Your mother named him.”
“Really?” Donna snorted. Suddenly, her father’s odd name made sense.
“Really,” he nodded. “There’s magic in names, you know.”
“Yeah, tell me about it,” she grumbled, wondering, not for the first time, why her mother had to choose to give her a name that clearly meant virgin. “Whatever. I’m tired of calling you hey you, so I’m going to call you Inky.”
“Inky?” he asked, scrunching up his nose.
“Inky, as in short for Incubus.”
“You can’t do any better than that?”
“Oh I see how it is,” Donna said and rolled her eyes. She had thought the name was quite clever. “You’re fine to have no name and then as soon as I give you one you become a name critic. Okay then, you’re now Blinky.”
“Blinky? Blinky’s worse than Inky”
“Pinky?”
“I don’t think-”
“Fine! I’m calling you Clyde, no more objections!”
“But that doesn’t even-” he began to protest, but Donna held up her hand.
“You are Clyde. Get used to it.”

To get the celebration started, I've got a Goodreads giveaway starting on Sunday the 15th for a paperback copy of Past Life Strife. This will run for two weeks. On the last day, November 29th, the Kindle edition of that title will be free. Friends without Benefits will be available around the same time, so keep up by following this blog or connect with me on social media: