Showing posts from November, 2018
Show all

Like Tears In the Rain (Only Worse For The Environment) 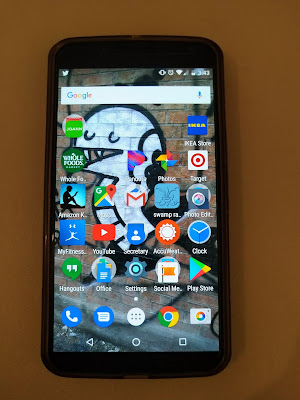 Back in February of 2015, I wrote this post , which incidentally started with the words "Back in June of 2013, I wrote this post" because I'm  nothing if not original. In it, I showed off my new phone, praised the marvels of technology, and geeked a bit over the fact that I had an Android called a Nexus 6. The geek part led me to make the offhanded claim that I was expecting to get four years out of the phone. At the time, I'd barely gotten 2 years from any phone prior thanks to a number of factors, not the least of which is planned obsolescence by both the phone manufacturers and service providers alike.  Three years and 8 months later, I still have the Nexus 6. Still rocking the bitchin' street art, but lousy with apps. But earlier this week, I purchased a new phone. The Nokia 7.1. Goodbye, bitchin'street art, hello self-referential Existential Dread Fish. There were a number of factors that led to me looking for a replacement, none mor
Post a Comment
Read more
More posts