The (small) Dog Days of Summer

I'm sure you've seen the memes, the ones that show something great with the caption "my fall plans" contrasted with something terrible captioned "the delta variant." Well, a similar situation happened to us recently.

In retrospect, I should have known that making any travel plans would be a bad idea. Especially when the CDC decided to prematurely pull the mask recommendation for vaccinated folks, knowing full well that meant everyone, vaccinated or not, would stop complying with all virus abatement tactics. That I haven't come down with a breakthrough case is a testament to the efficacy of proper masking and avoiding unnecessary contact (seriously, get your vaccine and keep masking, it's not rocket science!).

However, a vacation was something we sorely needed, and we had a single one week window in mid-August to do so. As such, I made us plans to visit Austin. I secured a residential hotel with an exterior room entrance, planned outdoor activities only, and had a long list of vegan food trucks where we could safely pick up meals without ever stepping foot inside a restaurant. And I fought tooth and nail to get the time off of work, something, I might add, that I am still salty about seeing as everyone else had no issue getting time off for their vacations this summer, but I digress.

Much like the aforementioned meme, the Delta variant had other plans. Austin went on a level 5 alert, meaning any unnecessary public interactions were strongly discouraged due to the high level of community spread. This of course, while the governor held maskless, unvaccinated super spreader events. As such, we made the prudent decision to cancel our vacation, knowing full well it will be potentially years before we might have the chance for one again.

And while I'm extremely disappointed in my fellow humans, I do not regret my decision. Not just because I know that putting my own wants above the safety of others is despicable, but also because it gave me the chance to do something I have been on the fence about for a while. 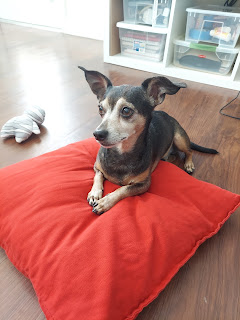 Also known a Nickopotomas, Nicholas No Cage, Nickelodeon, Smol Sir, and I'm sure these are only the first in a long line of exponentially more ridiculous nicknames (ha!) this very small gentleman will accumulate as a member of our household.
After losing Sally in January, we decided to put off getting another dog, mainly because after selling the house, we didn't have the same huge yard to allow a dog or several the freedom to run about. But that was because when I thought of a dog, I thought of a large-ish beast with boundless energy. Small dogs have simply never been on my radar. Until we saw this guy.
Nick is not a puppy, he might even be a senior, we won't really know more until we take him for his first vet visit later this week. But he's shattered all of my preconceived notions about small dogs, chihuahuas in particular. He is very much a dog. He pees on trees, he plays with toys, and he seems to have two settings: run like heck and sleep hard. Admittedly, he does growl if I try to make him do something he doesn't want to do (like wake up or allow me room on the sofa), but so far, he doesn't bark excessively and he is not a biter.
And while I still love dogs of all sizes, I gotta admit, being able to eat without worry that he'll try to steal my food is pretty amazing. So is not being dragged on walks. No doubt, when we finally decided on a permanent location, we'll be looking at other smallish to mid-sized beasts to add to our home.
Which brings me to my last point, Nick, a small and possibly designer dog (we think he's a chiweenie), was found at our local shelter. It should go without saying that rescuing animals is a million times better than buying from a breeder, and yet, here we are, with a bunch of hastily purchased pandemic puppies sitting in shelters.
I can't say that I'll post more often now that I have a reason to use my camera, but if I do, expect more pupdates on Nick. Hopefully by the time I write again we'll have figured out a cure for his incredible chihuahua breath.