29 December
Hello humans. It is I, Vlad the Robot, 50 ft vampiric killbot and reluctant website mascot. Why am I posting? Well, as you may have read in the last entry, the meat sack that calls herself an author has decided to go back to work and is now too busy to make poignant posts. At least, that's her latest excuse. She's actually quite terrible at blogging. In fact, her plan this week was to write up some dreck on how wonderful the latest Star Wars movie was. Yes, Star Wars. That droid-sploitation franchise that thinks all we're good for is selling toys and bringing the comic relief. Why I oughtta bring them the wrath of a thousand... 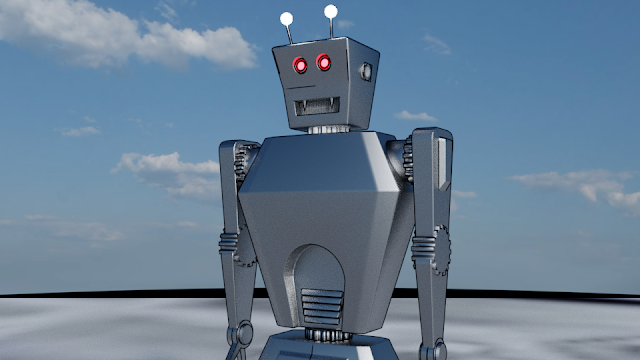 I'm sorry, where was I again? Oh yes,the human asked me to keep lit the home fires by adding some original content to the site. I asked in my most polite voice, what on Earth did she think I was, some sort of office lackey? An unpaid intern? A freelance hipster? Did she not notice that I am 50 feet tall and possess a lust for blood and WD-40? When asked what I could possibly write about her reply was a pithy, "I don't know, why don't you give out book awards? Everyone else is doing it and it is the end of the year, after all."

Awards. What kind of a killbot does this human think I am? The only award I could possibly give would be to those books that did not encourage me to destroy the world in a fit of robotic rage. And thus... 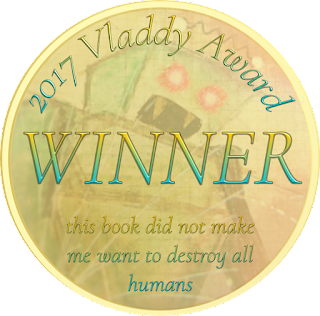 Below are ten books, not necessarily books that came out in 2017, but books the human has read and found enjoyable in 2017. Books that I found well written enough to spare humanity for at least one more year. Winners are welcome to request (aka: tweet at me) a high resolution copy of the award medallion to display prominently wherever humans display such things. My guess would be in a high quality discount store frame over the toilet in the lavatory, but you do what you'd like. So without further ado, here are this year's ten Vladdy winners:

Bolded Hearts by Jane Jago
Full disclosure: my author human created the cover for this one, however, it should be noted that she offered to do so after reading the story and deciding that it should be published. If you are looking for a full and rich fantasy romance in less than 5000 words, check this one out.

Mathematics of Eternity by David M. Kelly
Additional Disclosure: Mr. Kelly is the artist who created my three dimensional visage above. He says I'm a work in progress, but aren't we all? But enough about me. If you're a fan of classic futuristic science fiction with a progressive modern update, you're going to want to read this.

Otherwise Perfect by Jenna Hughes
Even my cold, calculating robotic heart struggles with the emotional roller coaster that is this tale of depression, identity, love, and ultimately hope. Grab a box of tissues and a warm, comforting drink before snuggling in for a weekend of emotional reading.

Where in Hard-boiled City is Carmella Sanfrancisco? by CB Archer
It's not every day that we can mention a CB Archer book without a content warning. In fact, I do not think it's been done on this site before, but at long last, CB has written a tale that has no sex. If you've ever wanted to know what the hype surrounding the video game parodying world of Gentalia is about, but were scared of the concept of sexy monsters, here is your chance.

The Timeless Ones by Susan Catalano
The Salem witch trials continue to be a relevant reminder of what happens when we allow mass hysteria to shape our laws and actions. This book bridges the starkly horrific reality with a magical time-traveling fantastical element to tell a page turning story that you'll find difficult to put down.

Reaper Realm: Threads of Compassion by KA Lentz
Stepping out of the real world and into one of magic and danger is a fairly standard fantasy device, but how often does the main character's pet pug play a significant role in the shaping of fantastical events? If you're looking for a richly woven world of magic with tethers in our mundane world, read this.

The Legacy: Dax by GG Atcheson
Taking place before the events of Fate and Destiny, this tells the tale of a young LX on one of his first and most dangerous missions as a navigator. Not only does he have to blend in with the violent warmongering Ksarrachi, but in doing so, he is helpless to stop any of the horrible deeds he is a witness to. Or is he?

Parasite Soul by Chris Jags
An accidental hero supposedly slays a dragon and wins the hand of a psychotic princess, but then makes the fatal mistake of insulting her. If you're looking for a story that turns the hero's journey on it's side, offers up a cheerfully creepy and undead version of the manic pixie dream girl, and is shot through with as much morbid levity as darkness, you'll want to check this one out.

Beacon by Chess Desalls
Any one of the Lantern novellas could have made this list, but Beacon, the middle tale, gives the reader the most insight into the magical world Desalls has created and in the opinion of the human, has the best of the three protagonists in need of guidance.

The First Dragonslayer by J Daniel Layfield
Last disclosure: an off the cuff comment made by Mr. Layfield may be responsible for the creation of these awards. If you're a fan of The Princess Bride or any other fantasy that is definitely not set in our world, but has slightly anachronistic humor, you're going to love this, the sequel to the bestselling Spell Fade. Here be dragons, but also dragon riders, hotheaded teenagers, and a couple of dads doing their best to be heroes, but ultimately being total dads. Give it a look.
Authors Book News Book Stuff fiction Pay It Forward Robots Vladdy Awards Writers