10 October
I am pleased to announce that The Princess Rebellion, the second book in The Kyroibi Trilogy, has been published to Amazon and the Kindle Edition is now available for pre-order! Which of course, brings us to the cover! Once again, I was fortunate enough to have original art by Missy Sheldrake. This time around, Missy had three leading ladies to contend with and I think she did a great job of portraying them all. So without further ado, here is the Kindle Edition cover for The Princess Rebellion, along with the synopsis: 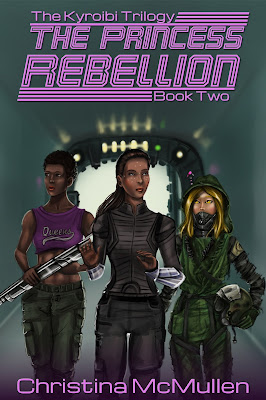 Although Ellie always wanted to save the world, she never wanted to rule it. But as the true master of the Kyroibi and heir to the Korghetian throne, she’s now expected to do both. Worse, she’s also expected to play nice with the other leaders of the Ghowrn Alliance, including the overbearing Prince Gevandar, who sees her as nothing more than a weapon to unleash upon the Huptsovian Empire.

When imperial ships are discovered lurking in Ghowrn space, war becomes inevitable. Ellie finds herself pressured to use the automaton army under her command to end the battle once and for all. With only a handful of allies, she instead embarks on a mission to free the Alliance planets under Huptsovian rule, determined to avoid a full scale robot invasion.

Besides, the more she learns about her mysterious battalion, the more she wonders if peace was ever truly their purpose. And if so, at what cost?

The Kindle Edition releases on November 10th, but it is available for pre-order today. As with all of my novel-length books, this will also be available in paperback format, which will go live around November 1st. As always, if you order the paperback edition, you are entitled to a free Kindle Edition through Amazon's Matchbook program, so keep that in mind if you plan to purchase both!

And of course, this leads to the reveal of the paperback version. This time, there isn't a whole lot that's changed between the two, but again, the reason for the separate covers is to have something that works for the Kindle format while also having a way to display all of Missy's art. 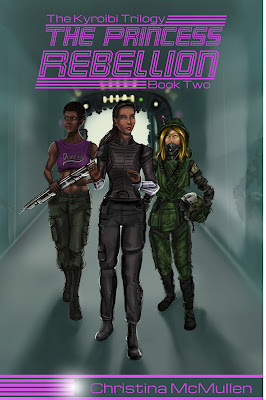 Stylistically, this is perfect. As I mentioned when book one came out, I was trying to capture the sci-fi YA covers from my youth and Missy once again nailed it. Now, for a small secret: Both this cover and the cover for A Space Girl from Earth depict characters in the book from scenes that happen in the book, but I deliberately gave Missy information that was just a little different from what actually happens. There was a reason for that. A silly reason, but silly is my forte. Those covers I adored from the late 70s and early 80s? They were all inconsistent with actual book events. When I give her instructions for book three, I'll be doing this once again. ;-)

Interested? Intrigued? Wanna know more? Then read on for a small excerpt from the first chapter of The Princess Rebellion, The Kyroibi Trilogy Book Two!
(But do beware that the following excerpt contains slight spoilers for those who have not yet read A Space Girl from Earth)

She took in another breath of fresh, clean air, savoring the sweet crispness with a sigh of contentment. As much as she adored New York, Ellie wondered how she would ever again suffer the pungent city air. Her spirits sank as she thought about home and her determination to make it back to Earth. Already weeks had passed since she’d left and the ache in her heart hadn’t lessened. She began to wonder if it ever would.

A light breeze rustled the leaves of a nearby tree, swaying the soft, willow-like branches against her bare arm. She reached out and absently ran her hand under the slender leaves, noting that they felt more like the silky mane of a horse than any vegetation she’d encountered on Earth. It didn’t stop her longing, but she found therapeutic comfort in the touch.

“Do be mindful, Lady El’iadrylline. It will not do to be found in violation of the very conservation laws your own great grandfather drafted long ago.”

Every muscle she’d just managed to relax stiffened at the haughty scolding. She bit back the imprudent comment she wanted to make and instead turned to face her intruder with an icy glare.

“Is there something you need, your majesty?” she asked, not bothering to mask her displeasure over being followed. The biggest problem with uncontrolled pulsing was that Ellie had no way of keeping her whereabouts secret. The Korghetian atmosphere was so clear that the slightest trace of energy pollution stood out like a homing beacon.

“There is much that I require, my lady,” came the reply in a voice that dripped with sarcasm and innuendo, eliciting a physical shudder of revulsion. “Though at the moment, I’ll settle for your attention.”

A Sintarian by birth, Gevandar stood nearly a full head shorter than Ellie, but presented an imposing figure. His shoulders were as wide as three of her standing side by side and the thin material of his shirt made it clear that not an ounce of his considerable weight was fat. He might have been considered conventionally attractive, but his overbearing attitude and constant scowl overshadowed any positive traits in Ellie’s opinion. Worse, as she learned all too quickly, Prince Gevandar was not used to having his authority challenged.

“I’ve called a meeting of the Alliance Leadership Assembly this evening,” he informed her, as if that were enough of an excuse to follow her half-way across the planet and interrupt her one moment of peace.

“As I’m aware,” Ellie said with a clipped tone, holding up her arm to show off the personal info unit on her wrist and the calendar notification blinking on the thin display. The bracelet-like unit served much the same functions as her smart phone had back home, but without the luxury of a full display, the internet, or anything fun, for that matter. It was closer to a wearable version of the PDAs that were popular among businessmen in the late nineties with the added inconvenience of a communicator she’d not yet learned to silence.

“Yes, I am glad to see you are no longer ignoring notifications, however, my purpose for being here now is to inform you that a decision will be made as to our next military strike against the Empire. You may wish to make preparations and inform your automaton.”

If Prince Gevandar meant for his words to elicit a reaction, he was to be disappointed. Yes, she was internally fuming, but she would not give him the satisfaction of knowing how angered he’d made her. Instead she simply nodded in an invitation for him to continue. After a moment, when it became obvious he would not, she raised her eyebrows.

“And was there a reason this was important enough to seek me out when I clearly did not want to be bothered?”

“My lady, I am aware that you have just returned from exile on a primitive planet, but I must insist that you respect my position and show this respect by addressing me properly.”

At this, Ellie lost her composure. Whether the prince had meant the insult or not didn’t matter. It was bad enough when her mother made comments, but she was most definitely tired of hearing about how primitive Earth was from a bunch of people that had not only never been there, but had enough dubious practices of their own to be considered primitive in her eyes.

“Do something to earn my respect and I’ll consider it,” Ellie hissed.

“Leading the war efforts against the tyranny of The Huptsovian Empire is not enough to earn respect, my lady?”

Ellie scoffed. “You speak of tyranny, yet you yourself act as though the world should bow down at your feet. You see me as nothing more than a vessel for a weapon you only know of as a bedtime story. You refuse to acknowledge the commander of said weapon as a person worthy of basic rights, let alone respect.” She turned back to the landscape, taking a calming breath as her diodes flared with frustration and anger. Losing her temper would do more harm than good. At last she turned back, keeping her expression neutral. “I’ll be at the meeting, your highness, but you’ll find the Kyroibi can’t be manipulated as easily as you’ve been led to believe.”

Without waiting for a reply, she pulsed away, returning once again to the gloomy castle underground, feeling as if the entire point of her trip to the surface had been for nothing. Anger and frustration radiated from her every diode.
Book News Book Stuff fiction Girl Stuff Promotions Robots Sci-Fi Write On Writers