02 March
Hello Everyone! Welcome to the last day of Indie Author Spotlight 2017. This time, we've saved the sparkliest for last. Missy Sheldrake is the author and illustrator of the Keepers of the Wellsprings fantasy series. Her latest book, Call of Hywilkin, is out today and is the fourth in the five(?) book series (more on that question mark below). In honor of her new release, Missy is being incredibly generous and giving away the first three books in her series for free. I sat down with Missy earlier in the week and talked about this series, writer life in general, and fifty foot tall rainbow fairies. Sound interesting? Well read on! 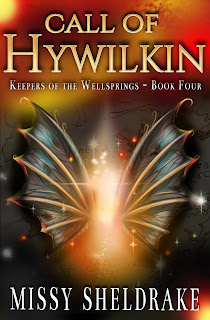 Christina McMullen: Hi Missy! Thanks for subjecting yourself to my interview process. Let’s start by getting all of the generic information out of the way. Tell us who you are, what you do, and why today is so gosh darn important.

Missy Sheldrake: I'm Missy Sheldrake, author/illustrator of the Keepers of the Wellsprings series. I write things and I draw things. Today, I'm really excited because this is release day for the fourth book in my series, Call of Hywilkin! To celebrate, I'm offering the first three books inthe series for free.

CM: All three? Free? But that's like, at LEAST a thousand pages of book, is it not?

MS: Yes. Hang on, and I'll do the math for you. Which means I must really like you, because I really, really dislike math. That is 1,211 pages. And the most exciting part is it's the first time the third book has ever been free!

CM: Dang! And even more dang, not all of those pages are words. As you mentioned, you're an author and an illustrator. Your series is fantasy and has a variety of characters and fantastical scenes that you've illustrated and added to the books. Tell us a little about that. What inspired your unique world and what makes you decide which scenes to draw?

MS: I've always enjoyed fantasy stories. I grew up watching favorites like Labyrinth, the Never Ending Story, Legend, Princess Bride, and even the really good oldies like Clash of the Titans. Those movies and stories always inspired me. Beyond movies, I spent much of my teenage years playing Dungeons and Dragons and other RPGs, and in my twenties and thirties I got into online RPGs. I love the vast worlds available in those sort of settings, and how there really is no limit to them except for your imagination. My books are my own worlds, based loosely on all of those experiences and influences.

How I decide what to draw has changed since I started writing. It used to be that I'd try to choose scenes I could do justice to. I wasn't very confident in my illustrations at the beginning. Over the course of the series, you'll notice each book has more and more illustrations. That's because I grew more confident in what I felt I could accomplish. Sometimes I'll draw a scene my beta readers want to see, or I'll want to portray a character who interests me. Most of my illustrations are characters. Whew! That was a long answer. 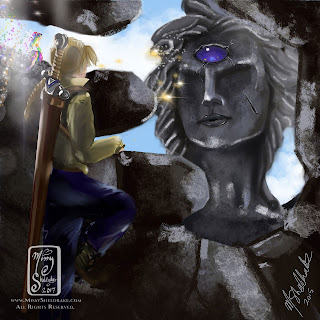 CM: But a good one! And let me speak for everyone on the planet known as Earth when I say you absolutely should have confidence in your illustrations. They're fantastic! Now, I'm going to get pushy because I'm allowed to do so since I'm running this interview. You have mentioned before that you are reluctant to call this series young adult. Explain why that is and how you would describe the path this series takes.

MS: Hmm, I guess because I hope to appeal to a broader audience, and I feel like categorizing the series as Young Adult compartmentalizes it a little too much. My heroine is a teen, and later in the series there are new protagonists who are also teens, but the series doesn't follow the typical path of a YA novel. I'm not sure how to describe it, exactly.

CM: Fair enough. Breaking molds is what being an indie is all about, right?

MS: I think becoming an indie is probably the best decision I ever made regarding these books. But to me, it's not really about breaking molds and trying to be special. It's more about appealing to a broader audience. I have spoken to nine-year-olds who love it, to teens, to twenty-somethings, and even a few in their seventies. I love telling these stories of good vs. evil and doing it in a compelling way that isn't ultra-violent or explicit but still has an appeal to a wider variety of readers.

CM: Oh crap. Well, I guess I'll just put this stack of fragile molds back in the cupboard. But we should break something. I know! It's time for the world breaking fun question!

Alien robots have invaded Earth and taken everything and everyone you've ever loved hostage. They've also broken reality and spilled your book's characters out into the real world. You can choose up to three of them to help you save the world. Who do you pick and why?

MS: Hey, I'm all for breaking stuff. Wait, this is probably the best interview question I've ever been asked. I have to think about this one for a minute. Are they magical alien robots, or just your run-of-the-mill alien robots? That makes a difference.

CM: Oh good question! Let's not complicated it too much. These are your standard regulation killbots. They have laser beams, but no magic.

MS: Okay. Wow. This is bad. Rian, definitely. He could blast them with magic, and I imagine he's read a lot about non-magical regulation killbots. There have to be books about those in the Academy. Azi would be there, too. You can't really have the one without the other one. Her armor is magical. It could probably take some robot blasts, and her Light sword would cut right through them...I hope. Flitt would have to come, too. Mostly for comic relief, but she's good when you're desperate for a healer. Actually, Flitt could probably arrange for a wish and get rid of them easily. Just don't tell her I listed her last. And don't tell Tib I didn't choose him. If the robots were magical, he'd have been my first pick.

CM: I can easily imagine a tiny, rainbow colored fairy pounding her tiny fists into the head of a fifty foot tall killbot and yelling at it for being 'typical.'

CM: Yes! Okay, back on track: Anyone who knows me knows I am addicted to adding silly in jokes to all of my books. Aside from the potential for a fifty foot Flitt, do you have any such gems in your books?

MS: I really have to think about it. I don't add them intentionally. I like making up idioms and creative curses. My stone giant, Bryse, uses a lot of stony expressions instead of swearing, like, "Crack the stone!" and "Rocks and dirt!" One thing I've noticed I never do is use any form of recognizable measurement. Nothing is ever described in feet, inches, or miles. Time is never described in terms of a minute or a second. I try to come up with creative ways to get the point across without using contemporary expressions.

I’m not sure that's really easter eggish, though.

CM: It's neat enough in my opinion! Now, you have released four books. Number five is the lasted one, isn't it? How does that make you feel?

MS: It makes me feel like...maybe this will be a 6 book series. Or maybe I'll have a spinoff trilogy. Or maybe both, and a prequel trilogy. How do authors let go? I'm not sure I can.

CM: We can't! Unless of course a new idea grabs us and won't let go. Like maybe you'll decide you want to write about... Mermaids? Yeah, let's go with this totally random topic of mermaids that has absolutely nothing to do with anything and definitely doesn't have to do with a first chapter of a rough draft I read a long time ago. Got any mermaid plans?

MS: Hahaha! Mermaids? Where on earth did you get that idea? Okay, don't tell the Keepers crew, but I may have a story brewing. A cruise ship, a woman overboard rescued. She's a teenager, mysteriously not on the roster, nobody knows who she is. I don't think I ever said anything about a mermaid, though. No way she could be one, right?  ;)

It'd be my first shot at a contemporary fantasy. But seriously, I'm hoping to release the fifth and final book around December-ish. I might mess around with mermaid cruise ship before then. It depends on how my summer goes. You're the one who coined the phrase summer mush brain, right? I know all about that.

CM: Summer brain is a harsh mistress. I wish you the best of luck working on anything while we melt like literary ice cream cones.

Well, Missy, this has been a great interview. Is there anything else you want to talk about or need people to know? Besides reminding them that right now they can download 1,211 pages of free book?

MS: I think they should probably go read those 1,211 pages instead of reading about me talking about myself anymore. I hope they do, and I hope they love it. And I hope they buy the fourth book, and read those additional 454 pages, too, and love them. And check me out on Facebook and Instagram, where I post progress updates of my illustrations. Thanks for the fun interview, Christina! You're pretty good at this interviewing thing.
HOly crap, that's a lot of pages.

CM: Thank you so much, Missy, for taking the time to speak to me. Call of Hywilkin is out now and once again, don’t forget to grab the first three Keepers of the Wellsprings books free today! 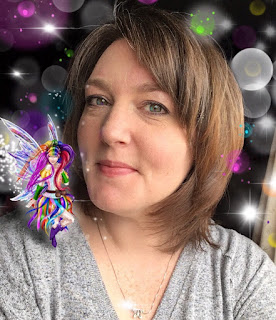 Missy Sheldrake is an author/illustrator who has been conjuring images of fairies in one form or another since she was very young. The wind in the trees and the rich scent of forest earth are her most treasured sources of inspiration, and on most mornings you will find her wandering the wooded paths, dreaming of the next adventure she hopes to put to the page.
Missy was born in Connecticut and attended Western Connecticut State University, where she earned a Bachelor of Science in Art with a concentration in painting and illustration. Even then, in her free time, she was writing. She moved to Northern Virginia several years ago and lives there now, on the outskirts of Washington D.C., with her true love and their son. She published her first novel, Call of Kythshire, in March of 2015 and intends to keep writing as long as the fairies allow it.