Write On! Our 15 Minutes Spotlight: Riley and Sara Westbrook

04 August
So I've decided to add this new segment to the Write On! series called Our 15 Minute Spotlight. I shouldn't have to tell you that I'm speaking of Andy Warhol's fifteen minutes of fame and not the fact that fifteen minutes could save you 15% or more on car insurance, but apparently, I just did.

This segment is reserved for authors who I've personally read, loved, and noticed were for one reason or another, not getting the spotlight they rightfully deserved, so I butted my big nose into their business and decided to see how I could help out. Which brings us to our first author couple: Riley and Sara Westbrook. The Westbrooks have written in a variety of genres through the (now defunct) Big World Network publisher, but as of right now, only have one complete series on Amazon in Kindle ebook format. 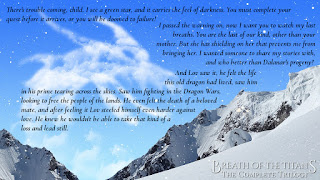 The series is called "Breath of the Titans" and is epic fantasy, sometimes known as high fantasy, but in the case of this particular story, high may refer to the mental state of some of the characters. This is the type of hero's journey, epic quest, save the world story that is common to fantasy, but at the same time, it's quite different. Case in point: I loved it and I'm not a fan of the genre.

In fact, I loved it so much, that after a friend noted the covers were a little hard to read, I offered to assist in a redesign to see if it would help get more eyes on the books.

Today, we're putting this theory to the test. On this day, Friday the 5th of August 2016, the first book in the series, Little Black Stormcloud, is free on Amazon. My hope is that through the redesigned covers, a semi-aggressive marketing campaign, and word of mouth via this blog and many others, this book will get many downloads by many people who may not have found it otherwise. It is also my hope that these same readers enjoy the book enough to read the rest of the series.


Now, I would also like to note that in addition to being a fantastic author, Riley is an amazing person as well. I can't say that I've ever met anyone who is as friendly, compassionate, and nonjudgmental, especially given the ups and downs life has put him through. So please, if you haven't already done so, go grab this free book, and then read on to find out Riley's views on writing fantasy. And as always, thank you for continuing to #SupportIndieAuthors.

by Riley Amos Westbrook
Have you ever tried to write an epic fantasy? I have, and I loved every minute of it. There's a lot of work and planning that go into building your world. Should I include a prophecy or shouldn’t I? Should I build an intricate magic school or shouldn't I? How much of my plans do I reveal to my readers?

I'm not your typical epic fantasy author. I don't use overly colorful language, though there are some curse words in my books. I tell it as I see it, knowing the story will carry itself in the end. There’s a hint of love that could blossom, but hasn't, and there’s no sex, for those bothered by it. A group of friends and family that only want to help:

There's Nord, an elf who is too pretty for his own good.
Sanche, a stern elven general looking to fade into obscurity.
Missy and her fairy friends try to keep everyone on task.
Tyrosh is a dragon unable to shift forms and held prisoner by the false Titanbringer, Martell.
Jaxon is the halfling friend of everyone, only along for the ride.
Martell is the man who stole Tyrosh's mantle.
And Lovonian is the one out for revenge, while seeking to bring balance to the world.

I wrote the books to learn to write, and I'm glad I chose the genre I did. Writing the story of Lovonian felt like telling people about a movie only I could see. I can still see the scenes clear as day if I close my eyes. It’s almost like magic. If only it was as simple translating the images to words.
There’s a ton of planning that goes into writing an epic fantasy, but I really did none of that for Breath of the Titans. I only sought to write a story I would enjoy reading as time passed. So far, that holds true.

Now I’ve written several different genres, from contemporary fiction filled with zombies and other monsters, to a science fiction adventure filled with a myriad of races. In both cases, it was much easier to start the world building process. It could be experience, but I think it’s genre.

In my horror stories, it’s much easier to get started because they are set in a world like this one. I don’t have to plan a religion, politics, or anything that I know the reader already knows. Whereas in a fantasy book, all of those things need to be taken into account. I can’t assume you know the religions of the world, because I am building it from the ground up. I can’t assume you know how the king will react, as he rules a land only in my head.

But in a contemporary environment, I can mention the president, and you can imagine how they could react. Same with religion, if I say Christianity you automatically know what I mean. That’s not to say that horror can’t have the same planning and storylines that go into an epic fantasy, just that if the author chooses they can be a bit lazier about the entire process.

Science Fiction is a bit closer to epic fantasy, as far as world building goes. I cannot rely on the reader’s knowledge to fill in the blanks on the same issues. But I can include modern gadgets and whizzbingers. I can say, “They carried a communicator in their hands.” and you can picture an image of what I’m talking about. You may even understand on a basic level how the contraption might work.

Harder to do that in a fantasy world. Harder to explain that the titans are robots made by magic. Or how a magician uses his mind to shape the very fabric of the world. These are concepts that, while not difficult to understand, are much harder to put into words. It’s much harder to convey exactly what propels them, versus in science fiction where I can point to the gears, nuts, and bolts and say, “That’s what makes it tick.”

Having written several genres now, I can officially say that they’re all equally difficult. The thought and planning that goes into any book is monumental. It just seems to me, that epic fantasy takes that little bit more planning. As it is, I'm amazed at how quickly my books came together. I learned a lot from the experience about pacing and telling the story you want to tell.

The great thing about an epic fantasy, or really any work, is you can put your ideals into it. Take Breath of the Titans, I wanted to write something that reflected all of the many religions I’ve tried to study in my life. I wrote the series with an approach to life that a new age spiritual person might use. I meditated and sat in the sun, thinking positive thoughts and listening to the world around me. Then I would go inside and sit in front of my computer, and the story would literally pour from my head onto the page. I didn’t have to think, I didn’t really plan all that far ahead. I had my characters and their limitations. With those in mind, the story seemed to build itself from the ground up. There’s a bit of foreshadowing in the book, though I freely admit most of it was accidental. It’s amazing what our minds can do when we sit and put them to work.

Everyone Dies At The End and Journey From Atremes have a little bit different process, but the premise is still the same. I go and I think. I work my brain muscle until it hurts, and then I work it some more.Keeping the voices of the characters different was simple, though I admit the dialogue is probably a bit more contemporary than in most fantasy novels.

I know this is going to sound a bit like schizophrenia, but when a character speaks to me, I hear their voice. The inflection, the way they carry themselves. I see it all in a million little images, shapes, and feelings. The problem I have comes from translating the sights and sounds in my mind onto the page for someone else to understand.

I tend to write in Rilenese, which means I need a lot of translation from what I originally put down upon the page to the finished story. People, places, names, anything can and will change during the process. Breath of the Titans never suffered from that problem. Once I started writing it, I had all my characters already pre-planned. Those characters are what compelled me to write the story. Having to choose between having them bug me or putting their words upon the page.

Even though I went into everyday with no idea what I wanted to write, I never had a problem getting words onto the page. I didn’t struggle to find things and events to add to the book. If anything, I struggled with finding places to fit their adventures into the novel. There are a thousand things I never mention in the books, because if I did the trilogy would be 1,000 pages long, and I didn’t want to write that.

I wanted to write a fun little adventure, full of excitement and imagination at every turn. I think I did that. Feel free to let me know your opinion.