13 Secrets & Easter Eggs Found in My Books (no spoilers!)

12 May
Today is Friday the 13th, a day considered unlucky by otherwise rational folks. For some, it's an excuse to stay home, avoid ladders, mirrors, and black cats. For others it's an excuse to watch cheezy horror flicks and wear hockey masks. For twenty-something me, it was an excuse to wear black lipstick, smoke clove cigarettes, and sneer about mainstream music being the devil and death is just so cool, you guys!

Since we only get one Friday the 13th this year, I decided to honor it by posting a handful of neat little secret jokes and asides I threw into my books. Nothing below should spoil the stories they came from, but they may add insight or a giggle for those of you who might have read them.

13: None of the witches in the Discordant series had names until Bogie shouted "Geez Louise!" As soon as I typed the demon's frustration, I knew my blonde witch with the big hair had to be named Louise. I wasn't kidding when I said these stories write themselves.

12: Speaking of the Discordant series, each book has thirteen chapters. Spooky. Actually, that's not really an Easter Egg. My use of magical numbers is about as subtle as a brick to the head.

11: In the Rock n' Roll mall scene in Going Green, the guitar with the ability to make Jayden Winslow forget about the zombie apocalypse is a vintage Rickenbacker. The reason it's a Ric is because my husband had recently acquired a Rickenbacker and could not stop talking about it. Seriously. If the world was ending that week, he would have been oblivious. Despite this, Jayden was not named so because it sounds like Jason. That was simply my dig at the current naming frenzy of Hayden, Jayden, Aiden, Caden, etc...

10: And speaking of that scene... Dawn of the Dead (the original seventies-tastic version), one of the cheesiest zombie flicks ever made, is the only zombie film I've ever enjoyed. Hence, it is referenced not only in Going Green, but also in Kind of Like Life. 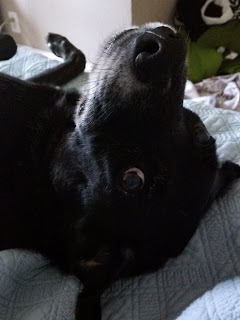 This is Sally, a ten year old puppy who is determined to remain the weirdest, yet most lovable mutt I've ever known. She is the only one of my pets ever to have made a cameo in my books. She appears as a gender swapped version of herself, appropriately named Monster, in Mother of Darkness. She also appears as a highly destructive Discordant in Frack You, the final book in the series. Both roles paint her in a flattering light.

8: Kind of Like Life plays off of many tropes. The whole point of the story was that I was seeing a very rigid style in young adult tales and naturally, I had to mess with that. Not all of the genre tropes I played with were serious, so while you've got Blake and Renee trying to survive mall zombies, there is also a scene in which they go to a traditional fantasy inn and order stew. Why stew? Because stew is apparently the only food fantasy inns are allowed to serve.

7: Cheddar Biscuits. There is a scene in Past Life Strife where Louise, a vegetarian, demands Seth take her to Red Lobster for dinner, citing the famous biscuits as to the reason why. This came from a conversation Jason and I once had about how chain restaurants don't have to be good, they just need to have one thing that everyone likes. He then mentioned the Red Lobster Cheddar Bay Biscuits and I gagged, because eww! Biscuits! Yes, even the dumbest things can be in jokes in my books!

6: A lot of people have speculated that they know what town I based Blackbird on. It's not as simple as that. First of all, geographically, Blackbird cannot exist. I've placed it in the Midwest, somewhere close enough to both Chicago and St. Louis to have a sports rivalry, but far enough away to be it's own little insular hub. This would put it somewhere around Terre Haute, IN, except that Indianapolis has to not exist. Now, as to the layout, yes, there are some similarities to the small northern city I grew up in, as well as some landmarks and references to some icons of my current Texan hometown. However, there's also a LOT of Scranton, PA thrown in because there's just something about that place that screams paranormal activity. This also contributes to my using Centralia as Seth's hometown.

5: Going Green is an obvious play on words, but despite what you think, giving my zombies green skin was not a cheap attempt at shoehorning the joke. Rather, it was a combination of the fact that the Universal Monster's Frankenstein's monster is green skinned and that one of the search terms that had inadvertently brought someone to my blog was 'green skinned alien ladies.' I kid you not.

4: I may have already talked about Lucy's fear of being underground and how that spectacularly that sucks for her in the Eyes series. Truth be told, it's one of my fears. I hate basements, tunnels, even caves and precariously overhanging rocks. Yet, I'm 100% cool with subterranean train travel. People are weird.

3: There is an intentional continuity error in the Eyes series. I can't say what it is because that would be spoilers, but it has been pointed out to me on several occasions and despite knowing that my reason for it is taking realism to an extreme, I won't change it. All I'll say is this: People forget details of even significant events all the time, but more often, people lie. Not to deceive, necessarily, but to keep certain truths truly special. There are certain stories I tell only part of.

2: Nai is not me. All of my characters may share some traits with me, that's only natural. However, despite my apparent intolerance of certain limited mindsets, I actually have more in common with the woefully idealistic Jem.

1: The Lou Zephyr building in my Discordant series is an abandoned 13 story building that is thought to be cursed. Lou Zephyr was a banker who was reported to make people pay with their very souls. Saying his name out loud may help you figure out why.