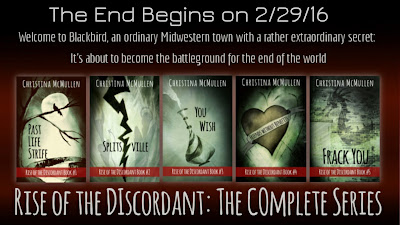 On Monday, February 29th, the Rise of the Discordant series is coming to an end. What had initially been an open ended project became an ambitious seven book series, but ultimately, I brought it down to five. Why? Well, to be honest, I had a nice, natural end to this story arc and decided not to fight it.

Besides, I may return to this series one day. If nothing else, I'm interested in following  certain characters on their continuing adventures. Perhaps fate may even take some of them out of Blackbird at some point. But for now, we have to say goodbye to the gang.

This is now my second complete series. It's quite a bit different from my first, but I'm no less emotional, which surprised me. I mean, this is my twelfth book and this series has been humorous. Surely by now I've grown accustomed to hitting publish and being on my way. No, not at all. It still hits me just as hard.

In the next few weeks, I will be working on four new projects to see which one will ultimately become my next book or series. That's just the four that are beating a path from my brain to my fingertips at the moment. There is certainly no shortage of ideas. I only hope to have time to give each their proper consideration in the coming years.

So what's on the immediate agenda? How about a huge sale beginning with the launch of Frack You on Monday. Splitsville and You Wish will be just 99¢ in the US and UK markets. Past Life Strife will be free on Tuesday, March 1st, and yes, there will be plenty of giveaway opportunities with the March contest, so keep an eye out for that post.

But of course, I'll also be taking a much needed break to dive into my to-be-read pile. Because what is an author but a reading fanatic who has taken matters into her own hands. 😉