22 July
Hi everyone! Today we're giving the robots and vampires the day off and instead, introducing you to the highly anticipated apocalyptic tale from everyone's favorite Supreme Overlord, Ann Livi Andrews. I've mentioned Ann before as she is the mastermind behind Support Indie Authors. She's also the author of several fantasy tales ranging from the contemporary Rehab for Superheroes series to the magical fairy tale like world of her Two Land series. But today, we're talking about Hollow Towns, a near future apocalypse thriller. First, let's take a look at this amazing cover: 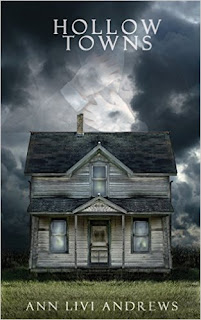 Beautiful, isn't it? And sinister. Having had a chance to get a sneak peek at the story, I'm going to tell you that this cover sets the atmosphere perfectly. But enough of my rambling. Let's turn it over to Ann for a behind the scenes and sneak peek:


Welcome to Hollow Towns: a book that has taken me nine years and countless revisions to finally complete and publish.

Even though I wasn’t actively working on Hannah and Charlie’s story for the full nine years, it’s been an exhausting journey. Each time I went through to edit, the story seemed to take a completely different turn than I expected. What is it about works in progress that seem to write themselves regardless of your intentions for them?

The lesson that I’m trying to take away from my first two full length novels taking me over nine years to write and publish, is that despite the ups and downs I’ve been through in life, writing has been a constant. I’ve never given up on it and it’s never given up on me. With each revision I went through with Hollow Towns, my experiences changed not only the plot, but my main characters and the emotion behind the book.

But my excitement with completing a book is always a little bittersweet. Now I have to choose another project to finish and I have to say goodbye (at least for a little while) to the characters I’ve grown so attached to. 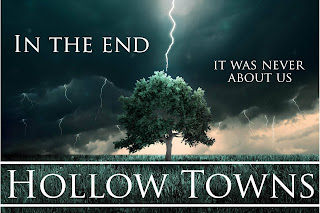 From the back of the book:

The end didn’t come swiftly as media and literature had predicted. There was no deadly virus released to wipe out humanity. There was no meteor on course to collide with earth. There was no Biblical flood or fire and brimstone. And there was no army of the undead to rise up against the living.

In fact, no one knew where or when it began. It was suspected to have first occurred in some remote village without the means to report what was happening. Even when it began to be reported, no one understood what was happening, so no one was alarmed. They were just lightning storms. First came a thick, gray cloud covering that blocked out the entire sky and all light. Then the steady and unending drizzle of rain that never turned into a downpour, but never lightened up either. Then there were reports of lightning. But no one took notice. After all, who cared about a mild storm? It wasn’t until the cloud bank reached Spain, and then France, that the panic began to rise.

Scientists called it a climate shift, but even they couldn’t explain how it was destroying entire cities or why there were very few bodies found. Paranormal experts claimed extraterrestrial visits and mass abductions. Conspiracy theorists believed the government was concealing either a massive war that was quickly escalating and approaching the United States or a government funded weather control experiment had grown to an uncontrollable scale. The religious believed, wholeheartedly, that it was the Second Coming.

But when the thick cover of clouds and the steady rain reached American soil, people stopped looking for the root cause and began trying to find a means of survival. In the end it didn’t matter whether a family had boarded up their house, hid in a basement, secured themselves in a panic room, fled to the country, or found a cave or underground bunker that they thought would protect them. It found them just the same as it had everyone else. And the cities that had once stood out so brightly against the darkness were now just as silent and hollow as every other town, village, farmhouse, hut, and tent around the world.

Sneak Preview Excerpt:
Lucy felt herself begin to shake, but kept her teeth clamped shut. She closed her eyes tightly and prayed that they were gone and wouldn’t return for her.
Get up.
She shook her head and clutched her legs to her chest even tighter. They hadn’t found her. Maybe they wouldn’t find her. Better to hide than to run.
Run.
Feeling a shiver of adrenaline, she stood. This must be what the fight or flight reflex felt like. Anxiety hit her full in the stomach. She couldn’t stay here, waiting for them to return. The last standing building in town, an obvious hiding spot.
She opened the door a little wider and peered out. Empty. Quiet. No shadows. No eerie faces spying in through the windows.
Anticipating the jingle of the door at any moment, she knelt down and crawled her way out of the closet. If she stayed low enough, they couldn’t see her. If she moved slowly until she reached the door, then maybe she could outrun them in the open.
The rational side of her screamed into her head. She should be hiding. Staying still. She didn’t know who they were or what they wanted. Why did she think she could outrun them?
But she knew if she stayed here, the anxiety would drive her insane. And so she crept forward. As she reached the final aisle, she thought she heard a noise outside the door. Heart racing, she froze. The jingle would come any moment.
But it didn’t. Nor did any other sound. No voices. No footsteps.
Slowly, she stood. And right before her head cleared the shelves, the most horrifying sound she’d ever heard filled her ears.
JINGLE. 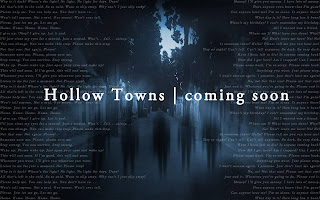 Hollow Towns will be available August 1, 2015
Pre-order your Kindle copy on Amazon Today! 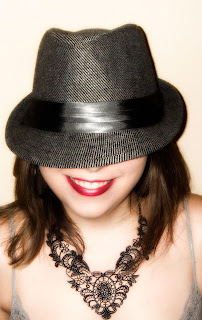